Transplanting lupine seedlings in the rain…..this is the only way I have found that the lupine bushes will thrive and survive, to be uprooted in the rain and to be replanted in the rain.  I have hundreds of these little seedlings in the stone scattered driveway.  They are 4th generation seedlings with ancestral linking to first lupine bush that was planted (by me, in the rain, from the river’s edge) twenty years ago.  The original great-great-grandmother bush gave up her body years ago, she retreated into the earth itself and became the soil bed from which her children now arise.

Lupine seeds are crusty and hard.  They need scarification to sprout.  This means they have to be scratched and scored and broken open by the essence of broken-open-ness itself, so the seedling can emerge.  They welcomed the stony gravel of the driveway and so they came, hundreds of them, just where the car has to passover.

This is the native California plant called bush lupine, or lupinus albinus, named for the white underside of their silvery soft green leaves.  These transplants will bloom after a few years, eventually with vibrant, deep purple-blue flower stalks covering them like fully evolved bouquets held by the long tap roots that support their stems.

Greetings from Cort Cottage Bed and Breakfast and Elsah’s Almanac from the Edge…….for more to come about how you can come for a “weeding retreat”, visit http://www.cortcottage.com, located in Three Rivers, California, at the entrance to Sequoia National Park.

Do you have a need for weed-ing in your heart and hands? 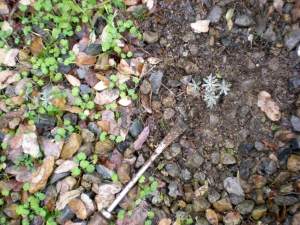